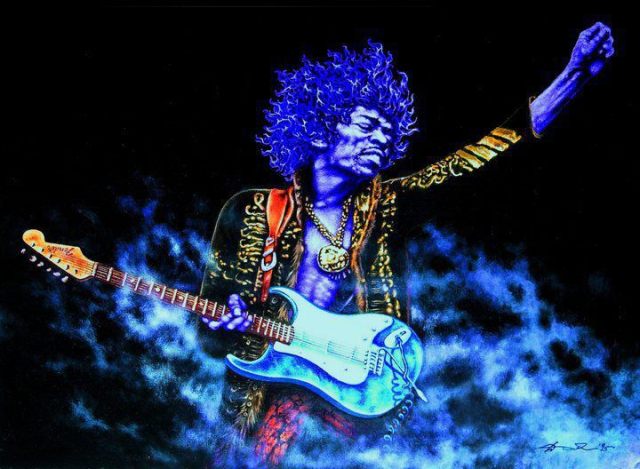 The first time I heard this song it was the incredibly complex studio version and for the first time I  felt touched by the hand of God. Which was astounding because I never really believed in one, up there riding a cloud. And I still don’t.

But this came from another place than here, somewhere in the universe I had never expected or imagined. It was the simplest explanation for something incredibly complex and so far out of the realm of anything I knew or thought before.

This was Angels singing, Galaxies humming in accompaniment , the Sound of Light and Heat, Air and Water, Pure Energy  disguised as sound and  the Music of All Matter within itself , because every molecule of my being immediately recognized it.

And no i am not insane. Although i guess if i was i would be the last to know wouldn’t i? lol I was never even a Hendrix fan much less fanatic before that night.If I heard you saying this about a perfectly ordinary vinyl record I would be certain you were mad , duped or deluded.  So i couldn’t really blame you if you consider me to be. Its cool. I know it sounds crazy as hell. But i don’t care.

But no mere mortal, no recognizable or familiar  aspect or association could explain, expel, understand  or excuse it, dismiss or dispel it once I heard it for the first time and it became a part of my mind and body. It was nothing I was prepared for or ever could have predicted. That a song, recorded on a record,  written by a man could be something so  beautiful, something that affected me in such a profound and overwhelming fashion. But it’s just a record, right? made by some guy? So …

Why did it have such a mental , emotional and physical effect on me? From the first notes I begin to breathe like I never have before, listen like I never had before, feel things I ever felt. With every word, every note , I waited in breathless anticipation, and even though I know what is to come each time I once again  am in awe of how much better it was than I had been ready for it to be, even though I was ready for the universe unveiling itself in all its glory. As always

Better than I ever dreamt or imagined  it was going to be. As I waited, in a state of bliss for every chord, every word, every note,  unable to do anything else but.

Every time since then I have heard it there is a physiological effect on me like nothing else in the world I have ever experienced or I believe ever will.  My soul swells, my nervous system calms and yet responds, I don’t know whether to laugh or weep or pray. It was a phenomenon, no doubt about it.  How does one try to describe the  intangible?

Even though it has happened every other time before, this  immediate complete  physical and emotional psychological , biological reaction. this state of bliss from the very first notes I am always surprised. No, shocked , when it occurs.

Maybe im always thinking someday it wont happen anymore, even though it has never failed to . Or that i had imagined it somehow, all the times before.

All i did was click a link.  and this was mine. WOW

Many years later I found this first version.  No fancy studio tricks,  no  production, no overdubs , no track upon track upon track , no other instruments or artists combining to create a lush under water other worldly place that had absorbed and amazed me. Its just Jimi. Alone. With his guitar. Not playing for anyone but himself . So quiet and intimate you can hear him turn the page of the sheet music halfway through as if you were in the room as it happened. ( Jimi used sheet music? who knew? lol)

Singing for no one but himself, but so incredibly beautifully yet without him even realizing, or intending it. Not performing. Just being Jimi.

You hear the term “Guitar God” so often over the years, as if they were streaming through every generation like downtown busses arriving on schedule, they are here, there and everywhere, these “Guitar Gods”

I’ve seen most of them. And they were all excellent musicians. But no one else but Jimi has made me believe I might be hearing an angels song . So to me there has only ever been one, and that is the way it will stay.

Here are both versions for you.

My mother called and told me to turn on the news.

I saw the film of the first tower and then the second and we all realized this was no accident.

My daughter had already left for middle school and my two older boys who i home-schooled and my new baby were asleep.

Then they hit the Pentagon.

By now there are helicopters flying over my house so loud and so close they were rattling the windows. Planes were falling out of the sky all around us within minutes of each other and the phones wouldn’t work anymore. Every number i tried to call got an out of service buzz.

I thought to myself the Pentagon is the heart of our defense system. if they take that out we are open to be bombed off the face of the map and to sit there like an idiot doing nothing while living a half an hour from the White House (one of the intended targets we discovered later) while all hell was breaking loose was not my style. i don’t mess about, i’m a person of action.  I didn’t waste a min because i expected to hear the news say at any moment ” evacuate” and if it did i was going to be ready for it.

There was no way i was going to let them evacuate one of my kids on a school bus for god knows where so i had no clue if they were safe or dead or alive so within mins i was in my car and demanded Roberta be brought out of class and sent home with me before the school even knew what was really going on.Then hit the gas station and filled the tank and a can with gas, there was no way i was going to sit in line if the word came to get the hell out of the area. I stopped at the bank, took out all the cash, in case we had to go somewhere that cash was the only option for currency and got a printout of all our financial records for the last six months. I had a vague recollection of reading a book called fail safe in junior high school that said if a bomb was dropped all our magnetic records would be destroyed, and the banking and credit cards records would all be destroyed. i came home , and fully packed the car with everything the four of us would need to either go to a refuge center or all our camping gear to get somewhere far from danger and within the hour , we and the car were were ready to be the first people on the highway if the word “evacuate” came on the screen.

In all the chaos and confusion and our proximity to ground zero was a nightmare, it sounded like a war zone outside. i still couldn’t reach my husband at the downtown at the embassy but i woke everyone up and dressed them and by noon we were  fully prepared for survival and ready to hit the road at a moments notice. When  we weren’t ordered to evacuate and things started to calm down and it seemed like the worst was over and my husband was came home from work at the regular time he thought i was the worlds biggest nut who completely overreacted.

I said he wouldn’t say that if we had been evacuated and we had food clothes money, Ids, cash and weren’t sitting in a gas station line ten miles long or sitting in a huge traffic jam on the beltway certain to come if we were all told it was time to get the hell out of Dodge. I think to do anything else BUT what i did would have been crazy. TO leave would have been overreacting, but being ready to leave was exactly what should have and must be done.

I don’t think i was an idiot at all. And i would do the exact same thing again  I don’t care if he thought i was a complete moron,  or if anyone else does but let  me ask you..

” if there was ever a zombie apocalypse, which one of us would you want on your team?”

If there is one thing i cannot bear its feeling helpless, like things are happening outside of my control that are going to do damage . Its the one thing that absolutely terrifies me. When i believe that something  awful is is going to   happen and there is absolutely  nothing i can do about it, to stop it or fix it. that was my way of feeling that i had some control over the situation and could take some sort of step, right or wrong, rather than sit by  passively waiting for whatever disaster may be headed our way.  i didn’t panic, i didn’t cry, i didn’t lose it, i just did something about it.  it turned out not to be necessary, but to sit in front of the television all day watching and doing nothing to protect my family would have driven me mad. I think so many people felt helpless and that the world was falling apart around them and there was nothing they could do, i did what i had to do in order to cope. And when i felt i had done all i could do, only then could i set by the television and see what was going to happen next. whatever it was, i was ready.